Designers can arrive at the ingate size and angle to achieve proper flow of melt; study the standing wave formation in the shot sleeve; determine the number & location of air vents and overflows; determine the impact of pressure intensification by conducting high pressure die casting (HPDC) simulation using ADSTEFAN.

Figure above shows the filling of the melt in die cavity and air flushing. In the left figure, the grey colour regions represent the molten metal in the die cavity and the blue indicate the air region in the die cavity. Highlighted region with multiple colour mixture, represent the region where there is a mixture of air and liquid metal. In the above pictures the circled- highlighted regions show the regions with probability of air entrapment defect formation. 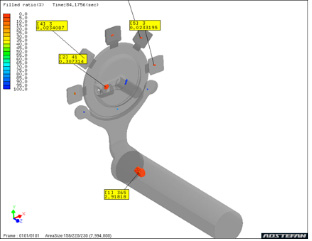