Defects in casting reduce the performance of cast component and not desirable. Caster has to supply components as per quality specification from the customers. 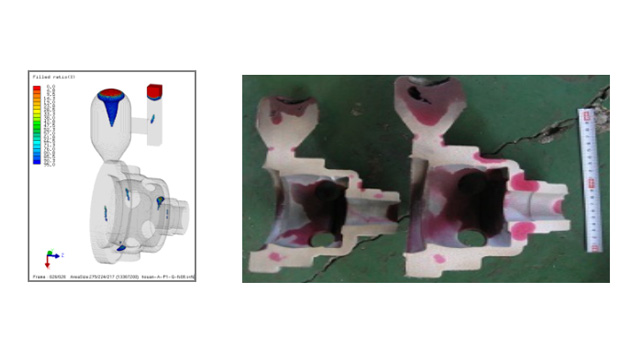 Figure above, left shows the prediction of shrinkage porosity using ADSTEFAN casting simulation software. Figure in right shows the defects in the physical casting produced in the plant.

Figure above, left shows the prediction of shrinkage porosity defect in casting using ADSTEFAN casting simulation software. Figure in the right shows the defects in the physical casting produced in the plant.

Using this insight from casting simulation, designer can redesign to provide sufficient venting to avoid and overcome air entrapment simulation.

Cold shut defect in casting occurs two the wave fronts of two metal streams meet, but does not fuse. This can happen when one of the wave front of melt has already lost its temperature and solidifies before molten metal fusing. Cold shut defect in casting occur at surface level with relatively large thickness, cold shut can be eliminated by increasing metal pouring temperature, preheat the die and mould. Improper casting properties to the alloy may also cause cold shuts. Proper optimization of the gating system, increase in pouring temperature can avoid cold shuts.

Figure above shows the two fronts of casting about merge their streams by computer simulation of casting using ADSTEFAN. One of the streams has already cooled to temperatures much below liquidus. From simulation a high probability of cold shut formation has been predicted. 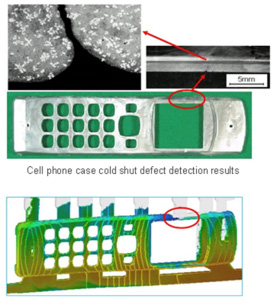 Figure above shows the cold shut defect formed in a cell phone casing cast in magnesium alloy. Figure shows the ADSTEFAN casting simulation and physical prototype produced and the micrograph.

Mis run is a casting defect that occurs when the molten metal losses heat, and temperature has been reduced to such a level, it can not flow further to fill the mold cavity. 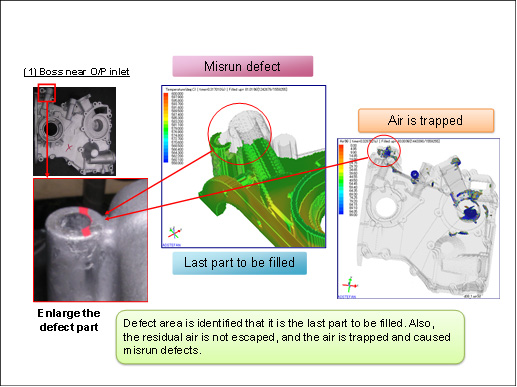 How Macro porosity (shrinkage defect) can be eliminated ?